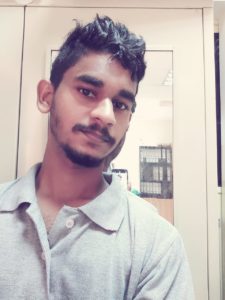 When I developed fever and throat pain for the second time in weeks, I went for the Corona test. Waiting for the result was the most tension-filled moments of my life…

Many months ago, I had a very comfortable, almost pre-fixed schedule: go to work in the morning, return back to my flat, wash, cook, eat, clean and then try to get some news about what is happening back at my home; check what they (my family) are doing there and so on.

It may sound boring to many but for a man like me, who is away from his family, it is a great relief. But the serenity of this daily schedule was broken by an anonymous intruder who stormed into our lives and tore it apart.

At first people called this invader by many names, even coined a nickname attaching the place from where it emanated but finally, they decided to call it the COVID-19 Coronavirus.

But even as the christening and the re-christening for this seemingly faraway virus happened, little did we think it would swiftly make its way to all countries, including my beloved second home — Oman. I often wonder how this horrible virus could enter this country without a visa? Can’t someone arrest this terrible, illegal virus, send it to jail and then deport it back to wherever it came from?

Oh you illegal virus, why don’t you go away please?! Other than make this nonsense of an outburst, what else can I do? In all honesty, I don’t know how this virus came, and I don’t know when it will go away from this peaceful country with so many loving people. I don’t know what is going to happen next.

So you got Corona?

Much before Corona came, I used to get fever and throat pain on and off. I don’t know why, I am very susceptible to this illness and when I developed these symptoms at the time the virus was slowly sneaking into Oman, those around me made fun of me: “Bro, it must be Corona!”

At that point of time, neither they, nor I had an inkling of the terrible destructive power this tiny, near-invisible virus posessed. None of us knew anything about it. Not that we didn’t read about it, but it didn’t capture our attention as we were busy with our work and our lives. After all, we have come to work here, and not while away our time or bother about a silly virus.

But, to our utter dismay, we soon realised that this virus was neither silly nor something to be trifled with. The ugly virus began to spread its tentacles everywhere and in all walks of life and ‘Corona’ was on almost everyone’s lips. This villainous virus was the subject of every talk. Switch on the TV, people were talking of Corona. Check social media and there was nothing else but Corona. Here, there, everywhere – we were literally swamped by this deadly Corona.

And not without reason because the pandemic was spreading panic among many people across the world for it began to take precious lives; it began to take away people’s valuable jobs; it began to make the poor poorer and the depressed even worse, even pushing the vulnerable to the very edge.

Masks, sanitisers, social distancing, lockdowns, all of this, however difficult were bearable, but the havoc the virus was causing both physically and in our minds were unbearable.  People whom we know got the virus and some of them, tragically, never recovered. It was devestating for me. I don’t mean to say that these people who had passed away were very close. Yet, these were people, whom we have heard about; people whose names who were known to us…and when they succumbed to it… we were caught in a wave that disturbed our very innards!

Earlier, some people scampered back to their home countries but then within days the ban was put on travelling outside the country. We could not go back even if we wished to. At the same time, more than the news, which kept on talking about people dying and the spreading of the virus, the social media began to create havoc. So, many false news began to spread through it. We didn’t know what to believe. Quacks grabbed this opportunity to come to the fore with various half-baked theories on how to ward off the dreaded virus: take heat therapy; wash in hot water; drink hot water… we did what we could to follow some of these advices not knowing which was true or which was effective. We were ready to clutch at any straw!

And then suddenly, amidst all these chaos, I suddenly began to develop fever and throat pain again. I immediately informed my supervisor and I was provided with gloves, mask and I was promptly taken to a private hospital where they did thermal scanning and many other regular procedures. Finally I was allowed to see the doctor who enquired about my complete travel and work history; whom I had contacted and asked whether I was in contact with anyone who had the virus etc. But, luckily, I had no such contact history and so I was prescribed with medicines for fever and within two days the fever and throat pain went.

After this scare, I kept to myself and followed all regulations to the ‘T’. But luck was not on my side, for within a week, I once again got throat pain and fever. This totally cracked me up. The doctor at the private hospital also said it was now time to go to a government hospital.

I was really down and I had real fear in me that I was infected. I had taken so much care, yet… At the hospital, once again I was asked all the usual questions and then led to a room where a fully-covered doctor, with face mask and shield did the COVID test on me. After that they told me that I must come back for the results after three days. I was told to strictly isolate myself.

I went back in a bit of a depressed state. What if it was Corona? What would happen next? Will they come and pick me from my work site?

Results in three to five days

Two days passed and the fever left but the throat pain still lingered as though it was not satisfied enough of troubling me. My supervisor also kept following up with me checking whether the COVID-19 test result had come. All of this propelled me to return to the government hospital, but they said the results weren’t ready and to return in another three to five days.

Only I know how I spent the time during the days I waited for the result. I think I ate my own nails and fingers. I was tense and anxious and could neither eat, drink, sleep nor even think. Thinking made me go crazy.

So soon after the third day I just presented myself before the doctor at the government hospital. With mounting trepidation, I waited as he checked my number in the computer. Suddenly, he stopped, frowned, shook his head and said: “Negative.” What? I asked not hearing him right. “NEGATIVE,” the doctor said and my heart leapt with a sudden surge of relief.

For once the word ‘negative’ was sweet music to my ears!

Quietly, I took a taxi back and for three days I didn’t budge from my room. Although I was negative for the Corona test, I did not take any chances. I also took all other precautions and not missed a thing.

For a person who has been deemed negative, my nervousness and tension was still palpable, but, just imagine the tension of the ones who are declared positive!

I don’t know what to say, but I pray for them and I pray with all my heart. And in my additional prayers, I just pray for the world to find a vaccine for this disease soon.