“A threat to our lives must be faced with caution – not fear!” 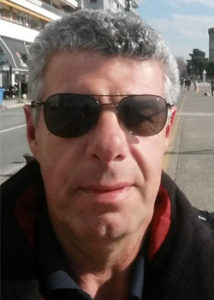 People are social animals and they must regain their natural inclination towards socialising
The effects of the threat presented by COVID 19 have been devastating to both personal and professional lives. I was affected in both ways.  And personally, it proved to be very detrimental to a budding relationship.

I live on an island, which is roughly three hours on a ferry and a bus from the capital of Greece, Athens. My new relationship lives in Athens. We had only two weekends available to get to know each other. After that, we were locked down for 60 days. In addition, because there are poor health services available on the islands, we were given an extra three weeks restriction on travelling to and from the islands.

The authorities were apprehensive  that if there were a COVID-19 case on the islands, it would spread rapidly. So they made us stay away from each other for 75 days in total. As a result, we were driven apart against our will to travel freely.

Severe restrictions
I am of the opinion that some of these restrictions were severe, unnecessary and unwanted. I also feel that in the name of the common good, some restrictions have been brought into place and they have done nothing but to instill fear in our lives.

Fear dominates our lives now
Furthermore, I had the feeling I was imprisoned in my own home. I was allowed out for a certain amount of time, not at any time but only a couple of times a day. And because of this I was totally frustrated and became uncomfortable with myself. Also, the horrible thing was that when out for the daily shopping, I would bump into familiar people who would stay away from me in fear I had been infected. I believe, this is the worst change of attitude, the fear that has dominated our lives after the lock down.

Professional life affected badly
As for my professional life, it has also been affected badly. I teach English as a foreign language at my privately owned school. Although it may sound impossible, there are still people who have no access to the Internet from home. I managed to persuade most students to switch to on-line classes.

In fact, I had to persuade the parents. Luckily, they are quite young mothers and saw it as the only solution available. But, as I said above, not everyone can log on to the Internet. A few had no access; some others had their laptops or tablets dropped and severely damaged. Therefore, I lost 25 percent of my students during the lock down.

Some measures have come to stay
Unfortunately, some measures that were taken in order to restrict the spread of the virus may have come to stay. The most “dangerous” is not to have more than 10 people together at the same time. This is a measure, which I feel is unwanted and simply puts the people concerned in a vulnerable position.

Additionally, people’s attitudes are to be taken into consideration. I see people being obsessed with disinfecting everything, including food. They avoid socialising; they restrain themselves to people from their close environment. All of this can lead to isolation and antisocial behaviour.

People are social animals
COVID-19’s impact is going to be there for a long time. And even after the crisis period gets over, we will witness all around changes that would post many challenges.

I wish people would have the means to see things in a different perspective. A threat to their lives must be faced with caution but not with fear. They must regain their natural inclination towards socialising. They need to understand that we are social animals and restrictive measures are not what should be driving our lives.